For ages I have been suffering from the thick gunky air of London. Those that have probably never been to parts of Scandinavia and Switzerland think the air is normal and totally accept it.

Pollution is ‘supposedly low’ on some days, but this is just to please business so they can carry on polluting as normal, and only  get caught if it is ‘too much’. ‘Low’ isn’t low enough!

Anyway, I had an anti-pollution mask, you know, one of those expensive ones  which I bought online, but they looked so ugly like you’re on CSI investigating a murder so I never even wore it.

(brief interlude: shouty, screaming kids out side. ‘Shut the F up’ I say to myself)

Anyway, the air was pretty bad again by London Bridge the other day, so I bought myself another anti pollution mask on Amazon, and AT LAST, it is easy to get attractive (for good reasons)  pollution masks now -not ‘anti pollution apparatus’. Yahoo!

Vogmasks are  made out of light microfibre are  easily washable. (I am going to try mine out soon, and if  I need to get an extra filter, will get one. )

They are easy to put on, funky, urban, contemporary and great for women cyclists. Imagine a cool pollution mask, Vogmask has really got them! They also stop you eating flies too, another bonus, particularly for vegetarians. I look forward to seeing what other designs they have too.

I would add that Vogmask do some for men too, and none of them are as horrible looking as the ones in cycle shops. Check them out on Facebook.

They are £14.99 but not as much as the ugly  male orientated ones you get in cycling shops at £30.  I am not sure how good they are scientifically, but I think that if they can at least stop some of the London dirt being chucked down your lungs, than can be  a good thing.

The cycling industry are slowly realising women are cyclists and now have better cycling clothes and better looking bicycles etc.  (The helmets are still naff for women and I have not had a single compliment for my cycling shop bought helmet, but I have, when I spraypainted it the colour of my choice – a cool plain metallic colour).

But the cycling industry, mostly male it appears, either doesn’t sell any pollution masks in their shops (despite the public’s pollution awareness) or sells only ugly masks for men, if they ever do.

I have always known we can get more attractive anti pollution masks but I often found them hard to get even online as some were from from China, and probably had high postage costs.

However,  I was really pleased that Vogmask, a right on Californian company, sells really nice ones. (I would have thought the environmentally aware Germans would have got there first).  I would add that I didn’t get one free from  Vogmask so I don’t have to write any silly fake crap to promote their business.

Let’s hope cycling shops can actually improve their selection of anti-pollution masks so that women, who want to be healthy and cycle in highly polluted areas can enjoy wearing them, and stop breathing so much traffic fumes. Hopefully mothers will also give them to their children to wear too when they’re out cycling.

Let’s hope we  can set a fashion trend for Vogmask pollution mask in the UK!

I have been having problems with my PC and the WordPress software. For example, sometimes when you press ‘Publish’, it just sits there, flashing and not publishing. I have tried different computers, such as at the library, and the same thing happens. Today I am at an internet cafe near London Bridge, and it seems to work, but I have to pay for it. I am hoping my own PC will publish my WordPress, as it is a real pain in the bum faffing round at an internet cafe. There are quite a few photos I wanted to upload. 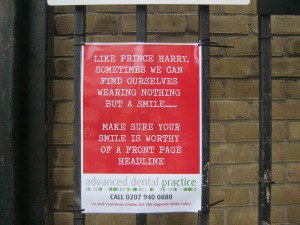 I spotted this poster near London Bridge by Advanced Dental Practice eager to make money out of his nudity. They were plastered around many streets and notice boards.

The Royals expect him to be a role model for  his charities but  from the  classy  nudey photo with all the cheap samey floozies he hangs round with clearly he does not care about his image . He is just a spoiled and sleazy Hooray Henry with far too much money in great need of fake Page 3 type women’s attention.  He is just not fussy who he keeps as company with and doesn’t care that he had a girlfriend, Cressida. ‘While the cats away’. At 27, he should know better. He really needs to cut down on booze and really get out of the Monarchy and the military, and do something he does best, maybe he could work in a nightclub. I am surprised he is supposed to be ‘a great catch’. I could think of a whole load of men a far better catch than him. Even the toads.

All we need now is an embarrassing drunken binge of a royal pissing in some seedy alleyway or defacing a war memorial. I feel sorry for the protection officers to have the burden of nannying him. A soldier who needs his own protection officers, really!

I just think that he is bringing the monarchy into disrepute and this is great for us republicans! Well done Harry, let’s wait for more sleazy photos to surface. And there’s very little that the Royal PR machine can do about it!

ALERT TO ALL CYCLISTS: Tower Bridge to turn Gold at 10pm tonight 1 Aug

Well, I have decided to go up there and experience this piece of history. I am at a cafe near London Bridge killing a bit of time. As my boyfriend (we are back together now) lives near here, I have a place to stay so I am very lucky. It is not 9pm.

Trust me to forget my bloody charger on a history making day! However, my friend has a computer so hopefully I will bash out something on my blog before my own PC goes kaput.

Had to barge my way into London Bridge station this evening. Commuters all coming back, you know, the non cycling types, It is a bit like a maze at London Bridge, but just about managed to find my way out of it.

I have some extra batteries in case my mobile dies. This will make up for my failings with my laptop charger.

I went past Bike For All in Tooley Street (all closed). I would have liked to have brought my bike along for the occasion but South Eastern trains have BANNED non fold up bikes.

Hardly any cyclist about. Looks like that mostly the Twitterati cyclists know about the *secret* 10pm Golden Light Up Night at Tower Bridge tonight. Maybe it won’t be very busy and I will get an excellent view!

One hour to go! Hope there will be a good cyclist turn out.

ALERT TO ALL CYCLISTS: Tower Bridge to turn Gold at 10pm tonightF

Love to hear the French reaction! So great hearing the crowds.