Well, we cycled to Victoria Park at about 1500 by which time there was hardly anyone there. (I had to get there from the provincials). Still, it wouldn’t finish until about 1700 so wasn’t too worried.

Last year, I started I think at Battersea or Clapham Junction (or one of those places!), so thought it would make a nice change, particularly as ‘I tend to be an East End Cyclist now’ and quite like that area as it is less touristy.

We collected our bibs and J had a whinge about wearing it because he ‘doesn’t like Sky’ because of something to do with Football and how it’s their fault why footie is so expensive for football fans. I sort of switched off at that point but got the gist. Football isn’t my thing even though J promises to take me to Leyton Orient one day. (I will be only there for the grub and people watching aspect. I find footballers really boring!

After a picnic in Victoria Park, we cycled towards Stepney, then went on the cycle path along Cable Street (where the Cable Street Riots were (Fascists v Socialists), Tower of London and towards the Embankment and Pall Mall.

We were a bit disappointed that most of the route was Not Car Free and young kids, at the age of 4, were cycling there amongst the buses. In fact, I didn’t enjoy a lot of the ride because of were were cycling with the cars. It sort of defeats the object. I may as well have cycled without Freewheel. Fortunately the Tower of London area was fine though.

There was fresh water on the ride but we didn’t see any banana stalls on the way. Luckily we had some food first and brought our own.

Then we arrived at Pall Mall and there were hardly any cycle stalls (at about 4ish). In fact, J couldn’t get a bicycle bell at all and I couldn’t see any cycle clothing stalls. Even Evans wasn’t there. Why? What was going on? Were the fees too expensive?

Fortunately, the London Cycling Campaign was there so I tackled them on The Aldgate Gyratory and they will investigate the fact that ‘there are no improvements!’.

Last year Hovis (Come back All is Forgiven) gave us loads of free healthy Hovis Sandwiches, decent cycle stalls and generally made the event less ‘fit for children’.

Some of the stalls were naff and unsuitable for cyclists who want to keep fit and healthy. A number of stalls sold crap greasy burgers. There were no Organic/Health stalls, Pasta, Smoothie Stalls or Health Stalls – such as gyms etc (as far as I could see). Now, if you are cyclist who eats tons of junk, then you have no problem.

I am not sure whether I will participate next year (although may be I will if I dress up perhaps!). In comparison to last year, it was quite ‘tacky’ and the food offered was ‘unhealthy’. The trick is to bring your own food which we did, and make sure your bicycle is equipped with a bell, before you go! 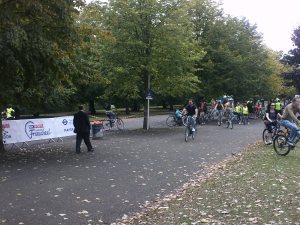 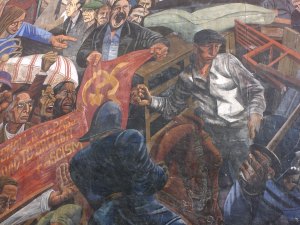 and a close up! 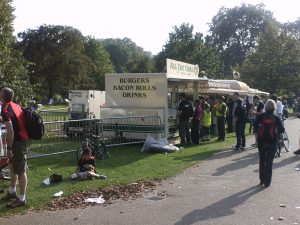 Sky expect some of us to be Olympic Champions, yeah right, if we eat this crap! Give us pasta, jacket potatoes, salads etc… and fruit!

I think we would get a better Freewheel if anyone who signed up would chip in a few pounds.

This entry was posted in Uncategorized and tagged freewheel cycling london bicycle. Bookmark the permalink.

2 responses to “Review of London Freewheel”