As we have seen from comments in an earlier post on Dublin trams, cyclists are now hurtling along tram lines but cyclists in Edinburgh are complaining about the trams because the wheels go into the grooves.

Now here is what the AA in Ireland have to say about cyclists’ safety and trams:

“* Be careful during wet or icy weather, as tram rails can be slippery.
* When crossing tram rails do so as close as possible to a right angle.
* Where possible, avoid braking whilst on tram rails.
* Do not ride immediately adjacent to a tram rail as cycle wheels may be caught in the tram rail groove,
* Cyclists are advised not to ride on ‘Tram Only’ Streets
* Some streets will be designated as ‘Tram Only’ Streets, the road surface within the tram tracks on these streets or sections of streets are not suitable for wheeled vehicles other than trams. Cyclists are advised to dismount at these locations.
* The acceleration and braking characteristics of a tram are comparable to other motorised vehicles.”

Just how is this safety message going to go across to all cyclists? And if there are ‘Tram Only’ roads surely this is not good, unless there are some good side streets for them to use, which is a bit of a nuisance.

Edinburgh Trams are liaising with SPOKES and cyclist lobby groups:

“Throughout the development of the Edinburgh Tram Project, The City of Edinburgh Council and tie Ltd have been liaising with SPOKES and other cycle lobby groups to ensure that the resulting infrastructure considers the needs of all users.

Designers have considered a wide range of cycle options in developing their
proposals which will be refined in consideration of various constraints.”

I know no system is perfect, but it has to be much better than people jumping into cars all the time but we do need to know how to deal with them, and learn of the dangers and whether all our bikes have to have MTB tyres, even the Bromptons, to jump over them or should we all go out and buy BMXs?

The Daily Mail is bonkers 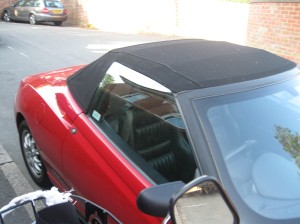 This is where our money is going, towards a flash car that is ‘essential for an NHS motorist’ to get to hospital a few miles away,

But they have trams in Dublin

My friend Ian took these photos when he went to Dublin a few weeks back.

Now why can’t London have trams? 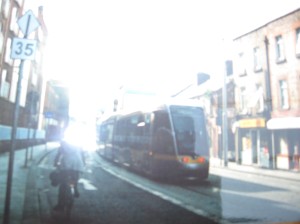 On some roads, vehicles are banned, but cyclists and trams can use them.

And on this video you can see the difference as on the motorists side, there are emergency sirens and honking! Trams are much safer, cleaner and more enjoyable.

You collect bikes – You may have Asperger’s

My bf and I were discussing ‘my weirdness’.

And one of them was ‘I like bikes’ a lot, so maybe I have Asperger’s.

It wasn’t just the reason that I liked bikes that made me want to take an Asperger’s Quiz, but the fact that I can’t always understand people’s gestures so face-to-face communication can be difficult.

I did do the test and it came out that I did have some Asperger’s Symptoms at 118, the rest was normal (or is that mainstream and boring?)

I thought it was just because I like more interesting things. I mean, does the fact that I hate boring golf make me have Asperger’s? Why can’t people who like boring stuff like that have their own Syndrome? There must be something wrong with them.

Well I just thought I was interested in bikes because it is healthy, free, and keeps me fit and it’s green but clearly there must be other reasons too. Maybe I am ‘just mad’. Maybe I have some severe brain disorder.

Take an Asperger’s Test and see if you come to the same happy conclusion that you are a happy, and contented bike-cum-Asperger’s Nut.

And bikes are a lot more interesting than collecting lawnmowers, so I suppose I don’t full blown Asperger’s.

Maybe all cyclists have it.

I went back there after work and the vandalised bike was still there.. but minus the English Flag.

The cheek of it.

A motorist I was speaking today said why can’t motorists pay their tax via fuel?

I said that many cunning motorists won’t even pay for the fuel and do a runner. There is little chance of everyone paying their tax.

Then of course there will be blockades. Motorists just don’t want to pay for anything.

The current system is much fairer.